With all of the craziness going on, Jon and I decided to take a weekend away and try to relax a little bit. We were going to go in January but a few days before we were supposed to fly out, the weather forecast showed rain, rain and more rain. So we delayed because we knew we’d be spending 95% of our trip outside. Glad we did because good weather was super important!

We flew to George, a city along the Garden Route (GR), which is a beautiful stretch of the southern coast of SA that is known for its lush scenery, gorgeous beaches and great hiking. George has a small airport but there were plenty of affordable flights that went in and out so we got on the first one on Friday and arrived by 9:00 am. We first drove to Mossel Bay (the western-most stop along the GR) and ate at the best-rated restaurant in town, Cafe Gannet, which didn’t say too much. (But it served its purpose, the seafood was fresh and we enjoyed the awesome breeze from the ocean.) We then walked around to see the Post Office Tree, which is a famous spot commemorating where a Portuguese navigator came to shore in after losing most of his crew in a bad storm in the year 1500. He wrote about his adventures and put the story in a boot that he tied to this tree, which started the tradition of this location serving as a post office of sorts. We then walked around Wilderness, the town we were staying in and had a lovely afternoon/evening – we played a game of Trivial Pursuit (SA Edition and from the 70’s, of course) at Flava Café, had a drink at a cute pub called The Blind Pig, walked to the beach and had a nice ‘Italian’ dinner at Pomodoro. Our hotel was essentially a room in the basement of a Spanish-style house – an interesting place – and we settled in for the night after waking up crazy early that morning.

A statue commemorating the boot! 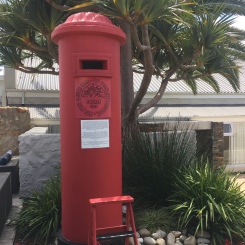 Another random post office at our restaurant, 50 meters from the tree…

Jon gets zany when it comes to Trivial Pursuit!

There’s a story behind this but I don’t remember… Delightful place!

The next day, we visited the famous Wild Oats Farmers Community Market, in the nearby town of Sedgefield, which everyone told us we *had* to go to. It was awesome. There were so many stalls selling produce, awesome vendors selling good food and a great atmosphere. We totally felt like we were at the Durham farmers’ market on a Saturday! We even talked to a South African couple while we ate our breakfast and they shared their thoughts on Apartheid and the Israeli-Palestinian peace process. Interesting stuff. Then, we got a podcast going and took the two-hour drive to Tsisikamma National Park (the eastern-most stop along the GR), had lunch at Cattle Barron (the official restaurant of SANParks – mediocre) and chatted about what we wanted to do while we were there. There was a kayaking and lilo-ing (apparently, that’s an inflatable mattress?) excursion that looked super fun but, stupidly, we didn’t have swimsuits nor towels. So, that was out. We decided to hike to the Storms River Suspension Bridge and, against my better judgement, walked across it. (Indiana Jones, anyone??) On our way back, we saw a speedboat that goes from where the Storms River meets the Indian Ocean, into the gorge, and took a shot to see if there were spaces. There happened to be one leaving right then and we quickly paid, donned our life jackets and sat down, cowboy/girl-style. It was really fun and it was awesome to be out on the water! After, we drove to Knysna (an awesome coastal town along the GR that is known for its oysters) and took a cruise through the lagoon on the John Benn (labeled as a ‘floating restaurant’), where Jon got tipsy and we talked to a nice British couple who were on holiday. The cruise takes you close to the Knsyna Heads, rock formations that frame the intersection of the Knsyna Lagoon and the Indian Ocean (and is a famous point where lots of ships have tragically crashed due to the narrow passage and strong tides). We then walked around the shops – Jon randomly struck up a conversation and exchanged e-mail addresses with a very energetic German guy due to their shared love of board games – and we at dinner at 34 South, SA’s version of the Cheesecake Factory, unbeknownst to them (i.e., humongous, spiral-bound menus & advertisements throughout). What a terrific day! 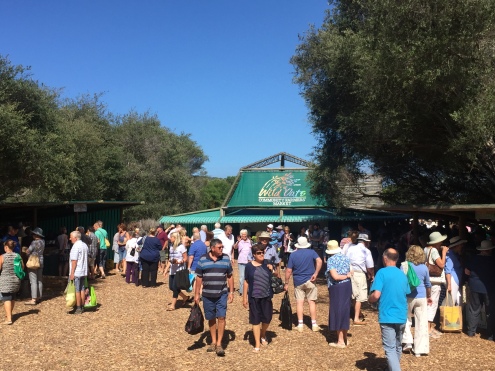 Getting ‘Durham’d’ in South Africa! 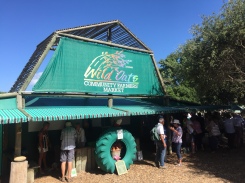 This doesn’t nearly capture the size of the crowds there… 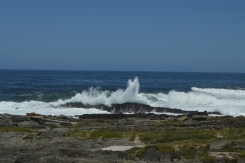 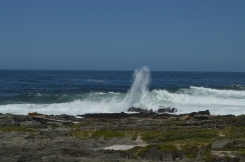 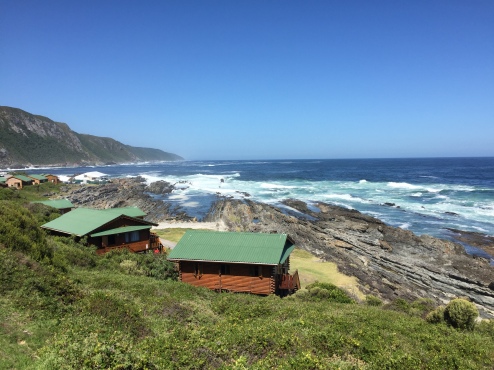 Cool cabins where you can stay right on the bridge… 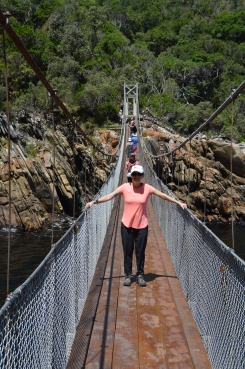 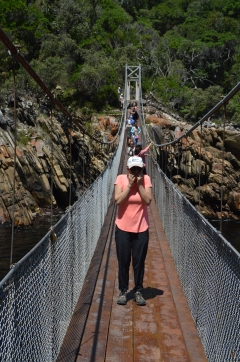 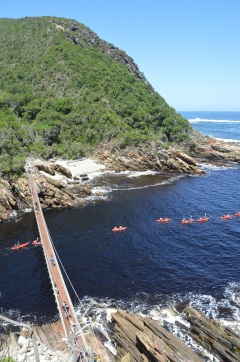 Kayakers heading in to the gorge…

Beautiful view from the hike! 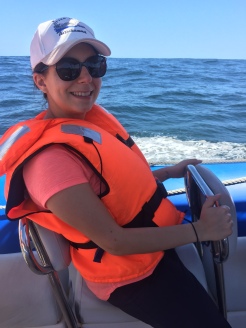 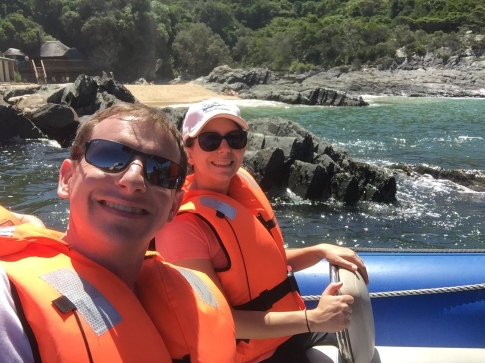 Woah, let’s do this!

Starting our journey into the gorge on the boat…

We went under that bad boy!

It was very Jurassic Park-esque… 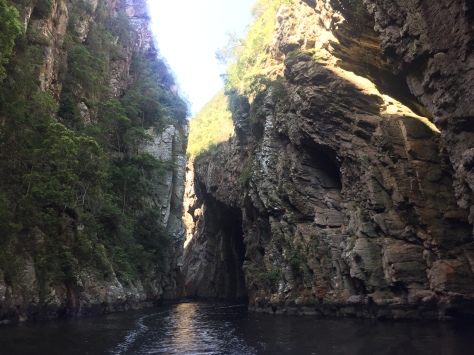 On our way back out!

The view of Knsyna from our boat… 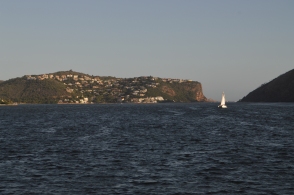 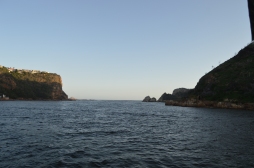 Seeing a bit of the west one, too…

Super safe cover for a hole that takes you down to the first level of the boat. For drunk people…

Neat signpost on the boardwalk!

The next morning, our final day, we checked out of our room (which involved leaving our payment in the microwave and throwing the keys through the open slats in the door of the owner’s apartment) – see? interesting – and headed to the Goudveld Forest to do the Jubilee Creek hike. It was a really green, picturesque hike with lots of birds and critters, as well as a neat, natural swimming pool and waterfall. (It also appeared to be a really popular place for families because there were good swimming opportunities throughout the creek.) There also used to be a lot of gold mines in the park so we saw tons of foreboding signs, indicating their now-closed entrances… We then drove to the Knysna Heads – the east side is a super fancy community with huge mansions and luxury hotels and the west side is a nature reserve – and had lunch at a really nice cafe, overlooking the water. After our meal, we walked around the shore and took pictures. We also found out you can drive to the top to see the full view – WOAH – and Jon said I need to stop picking my dream house up there. (Seriously, those places were insane.) Once Jon could pry me away from the beautiful views, we drove to the airport, checked in and ate at Wimpy (first time!) – one of two ‘restaurants’ there – and flew back. Yay for an awesome trip!!

Jubilee Creek! (Don’t worry, the water is clean. It’s just that color from the tannins from the roots of all of the plants! 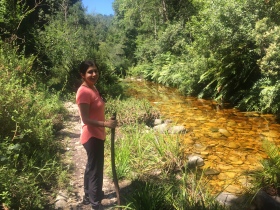 Woah, such a super hiker! 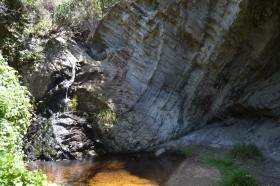 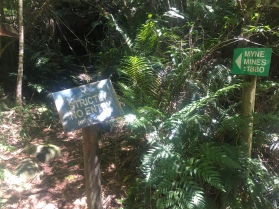 Watch out for the mines! 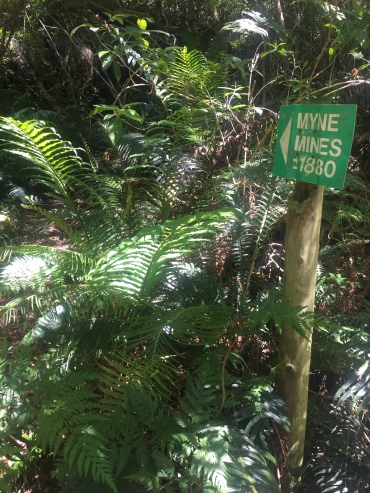 But here they are!

Ok, Knsyna Heads, I see you! 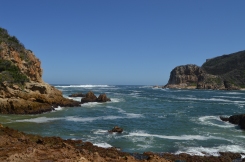 Yeah, we kinda liked it here… 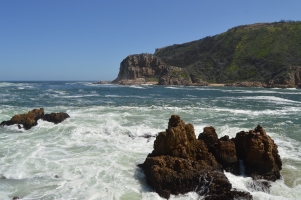 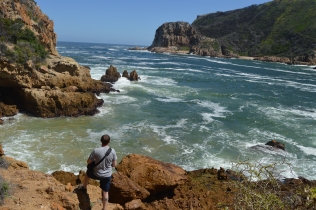 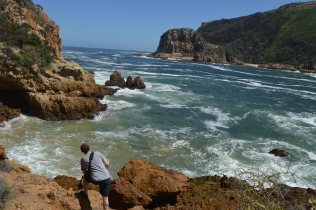 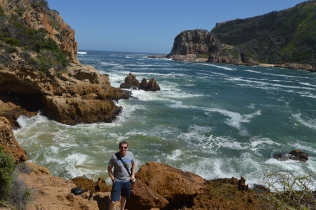 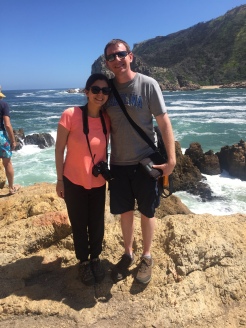 Another nice British couple hiked to this little unused area with us and took our picture! 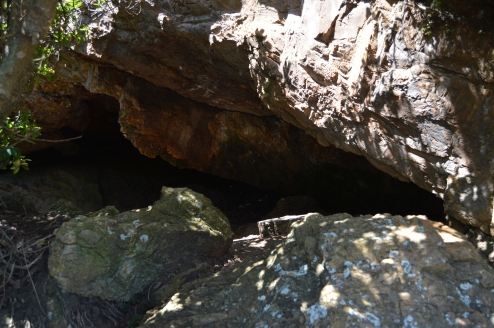 (We hiked through this to get there…) 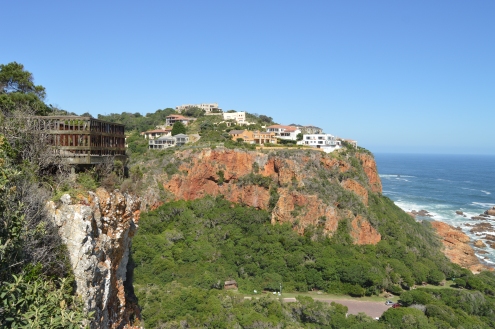 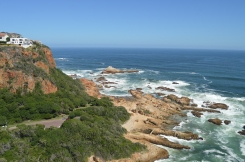 View from up top… 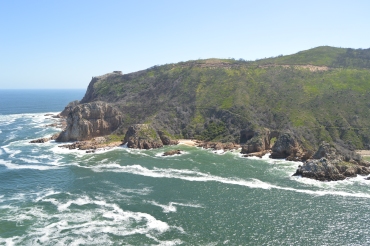 Bye Garden Route, we love you!

It ended up being a late night because we had to prep for our shippers who were arriving the next morning, but that’s for the next post. Stay tuned!

2 thoughts on “Lots of Mossels* and Oysters!”